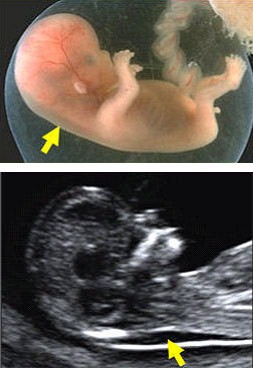 Personalised risk for Down Syndrome

Babies with Down syndrome and heart failure tend to have extra fluid at the back of the neck (arrow).

perform this Down syndrome risk assessment.

Each woman will be given an estimate of her individual risk for Down syndrome in this pregnancy.

This is calculated by taking into account the age of the mother, measurement of two hormones in the mother’s blood  and the scan findings. This test can detect about 90%-95% of fetuses with Down syndrome. 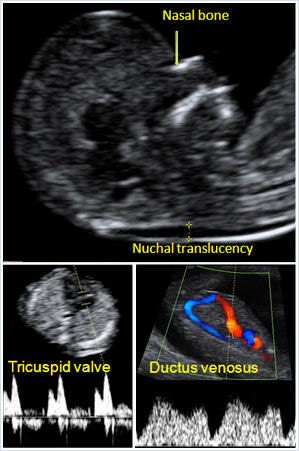 What is Downs Syndrome?

The term ‘syndrome’ is used to describe a collection of features which are often seen together. Down syndrome was first identified by Dr John Langdon Down in 1866, who noticed a similarity in appearance in some of his patients. These individuals possessed a broad, flat face, a thick tongue and a small nose and were intellectually impaired to a variable degree.

However, there are more differences than similarities between people with Down syndrome. Many babies with the condition will have one or all of the following features at birth: low muscle tone (a floppy baby), a face that appears flatter with eyes slanting upward, small ears and a wider neck than usual, a crease across the palm of the hand and a gap between the toes. Some may have heart problems. While intellectual disability is a feature of the syndrome, those with the condition will develop and learn throughout life, but at a slower pace than usual.

There is no cure for a child born with this condition but many symptoms can be treated and special early intervention programs are enabling these individuals to develop their potential. A child with Down syndrome can usually do most things that any young child can do such as walking, talking, dressing and being toilet trained although they may do these things later than other children.