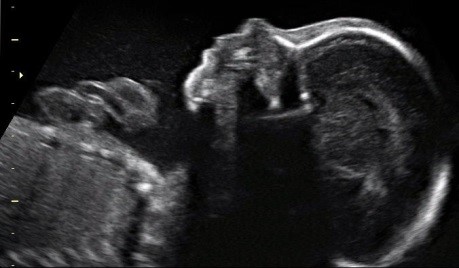 Despite all the buzz about 3D images of the baby, where it looks like a ‘real’ baby, your ultrasound examination must be done in 2D (dimension). This is because 2D is still the only way for the doctor and sonographer to see the structures below the baby’s skin, looking inside the baby, at the anatomy.

It helps you to understand what the various shades of white, grey and black represent. On ultrasound, fluid is black and you can see the baby moving around in the amniotic fluid. There are areas of black within the baby as well which include the brain, the blood in the heart and blood vessels. Any white you see is bone and cartilage. The different shades of grey represent different densities of soft tissue such as the placenta, muscles, liver and other organs within the baby. 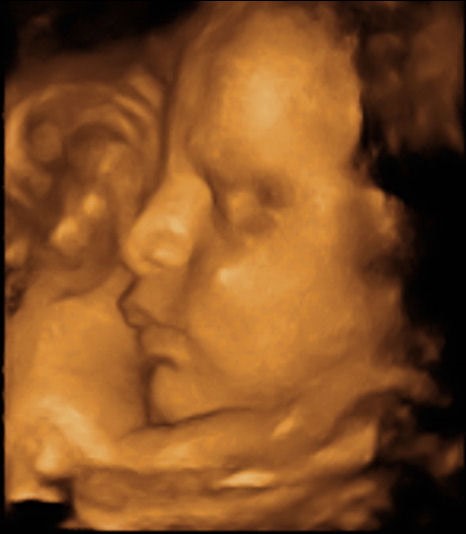 Those beautiful pictures that you see in magazines are known as 3D ‘surface rendered’ images. In other words, the ultrasound machine uses sophisticated software to construct an image of the baby as you would see it ‘with the skin on’. The technology is similar to that used to make animated cartoons like Shrek, so that the image you see on the ultrasound monitor is really a computer-constructed image, not a true peek at the baby itself. In order to get a beautiful 3D ultrasound image, the baby’s face must not be covered by hands or touching anything. Just like any picture, if the baby isn’t looking at the ‘camera’, you can’t get a good image. When the baby’s face is clear, the image can be astounding. But, if the hands, the cord, or something else is blocking the view, we can’t get that gorgeous shot like in the promotions. Don’t count on getting a great image every time.

4D is simply a series of single 3D images so that there is the appearance of motion. The 4th dimension is time. The important thing to remember when you look at any 3D/4D image is that it is a computer-constructed image, not a glimpse at the real thing. As such, the computer can make some odd assumptions as it is trying to render a realistic surface to the baby and weird bulges and lumps appear.  4D scans are used in the detailed examination of the heart, fetal echocardiography.

What are the limitations of 3D & 4D scans?

Remember that the 3D/4D is more of a fun tool than it is diagnostic. The medical use of 3D scans is to examine problems in the fetus such as cleft lip or masses. The advantage of 4D scanning is in examination of the fetal heart (echocardiography)– a moving structure. So detailed 3D and 4D scans are especially useful in high risk pregnancies.

The best time to get a good 3D picture scan of the face is around 27 to 30 weeks. At this point, the baby has begun to put on some body fat and looks more like it will at birth. This is also the time when it is most likely that you can get an unobstructed view of the face. After 30 weeks, the baby’s head usually becomes wedged down in the mother’s pelvis which is great for giving birth, but not great for seeing the face.